The Hunt for Ethel Mae

BC Williams, Writer/Poet :: ALL WORKS :: Stories in Short :: Once upon a time, there were readers of short stories . . .

The Hunt for Ethel Mae 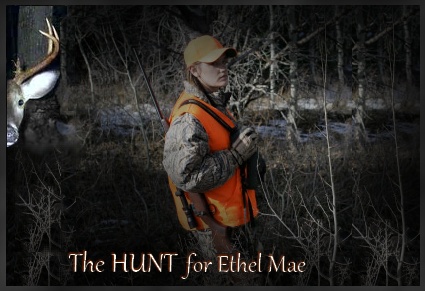 Stanley rolled his deep set baby blues toward the peeling paint flaking off the kitchen ceiling. Should have just stayed in bed, he thought . . . .

How was he ever going to talk her out of this. She'd had crazy schemes before, for Pete sake, but this time . . . couldn't she just be satisfied being a mom and nurse, he wondered. He asked her if she'd really considered what she was wanting. "I mean, come on Ethel Mae  think of it, all that tramping in the woods, and you know, you simply have to be quiet when you're out deer hunting! You gotta think of that.

Mae's pupils pulsed, bringing a slight smile to Stanley's face. She pushed a rubbery sausage link to the back of her plate and stabbed at her cold scrambled eggs, then muttered triumphantly, I know, Stanley, its just like gathering eggs.

Well you've gotta be quiet or the hens'll get suspicious and stop laying.

Now where'd you get that from?

Read it in a book.

Ah-huh . . . ." Eyes fluttering rapidly trying to clear away an image of suspicious hens, Stanley cocked his head slightly to one side and said, "but have you thought about where wed stay? Pretty cold in November, Mae!"

Well I know it is. But remember Jonathan's farm in West Virginia?

Yeah babe, and guess what - we've got it for five whole days! We can leave on Saturday!

And what about the kids?

Stanley sighed and quickly ran his fingers through his course, brown hair. Wrapping an arm around Mae's waist, he led her to the back door. Come on then, you better help me find the cooler.

###
The flashlight cast an eerie glow on the damp forest floor. Ethel Mae trailed close behind Stanley, mumbling under her breath.

"Did you say something, dear?" Stanley asked, preoccupied, brushing the light through the trees in hopes of spotting an abandoned deer stand.

"Oh, I was just thinking that we need to separate pretty soon. Hunters have a better chance if they're on their own, you know."

Stanley turned, and the angle of his flashlight illuminated Mae's utterly credulous face as she proclaimed, What? I read it in a book.

Stanley smiled. "Honey, this is the first time we've done this. Wouldn't you think it would be better if we stick together?"

Relax worrywart. Her shotgun shouldered, she pecked Stanley's cheek and marched into the early morning haze.

###
Using something akin to feminine intuition - just not as honed, Mae got on one knee and brought her face and flashlight close to four paw prints. The prints had to be deer tracks, she figured, so she followed them into the mouth of a cave, like a bloodhound with a snootful of fox scent.

And it was musty.

Oooooooo, Mae squealed! She dropped the flashlight and stumbled backward toward the entrance.

Whatever moved was now moving toward her.

Mae's heart shot up and lodged somewhere between her uvula and ears, taking her breath with it. She tried recalling everything she'd read about bears, but realized, that's one book she'd never gotten round to.

Stumbling into the morning light, Mae tripped, landing on her back with a painful thud. The beast was getting nearer and she squeezed her eyes tight. She didn't want to see all that blood that was about to be spilled.

There was a moment to ponder Stanley as she waited to be eaten. Mae thought of their time together, their children, Stanley blowing soft nothings in her ear. She even felt as if she could feel his soft breath caressing her flushed cheek . . .

She threw her eyes open. The beast straddled her, lapping her crimson cheek with its soft, warm tongue. OHYUCK! Mae sputtered. Like Daddy-Long-Legs, she brought her knees up and climbed out backward on elbows and fatigue boots. The beast ground it's teeth into her breast pocket and ripped it off.

Now cut that out, dammit! Mae jumped to her feet and backed away from the most glorious buck she'd ever seen. It's color was like fine champagne, it's eyes a deep Chesapeake brown, it's horns the color of alabaster - yet small and unbranched - the beginnings of a brand new rack, she supposed.

The buck moved forward and rammed its muzzle into her thigh. Mae backed up, but the animal pursued her as if she were the hunted. She climbed into the crook of a black walnut tree and got out her walkie talkie.

Stanley, you're not gonna believe it," she giggled breathlessly, "I've got a buck! .

There was a pause, then Stanley said,  I didn't hear a shot. What do you mean you've got a buck  how?

The animal nibbled her boot strap and Mae kicked out. Get on now, stop it! she shooed.

WHO you talkin' to? Stanley demanded.

I told you, I've got a buck here. He won't leave me alone either. - he's already ripped my pocket!

Ethel Mae! Tell me you did not use any of that Mrs Doe Pee on yourself . . . did you?

Stanley, do you think I'm that nuts? Women don't wear that stuff, it stinks. I don't know what's the matter with him, but he's got me treed and you need to come, cause I can't . . . Stanley, you'll have to do it  you'll have to kill him.

Beads of blinding sweat oozed into Stanley's panic filled eyes. His wife, treed by a desperate rutting buck trying to rip her clothes off. What was he doing just standing here?

Mae, honey, now listen to me. Get out that whistle I gave you and blow it hard so I can find you. You're gonna have to turn the walkie talkie off. Now blow every thirty seconds until you see me. And Mae . . . for God sakes, stay in that tree!

She did what Stanley told her, but every time she'd blow the whistle, the buck would grunt at her. He'd back up about six feet, lower his head and charge the tree.

Mae turned her walkie talkie on and called Stanley. You almost here?

I'm scared Stanley! The limb she desperately held on to cracked. Mae howled, He's trying to knock me outta the tree! I think the whistling hurts his ears . . . hurry. Her soft, brunette hair fell helter skelter from beneath her cap.

Okay. Call out to me as loud as you can. Maybe I'm close enough to hear you.

Mae set the walkie talkie on top of her head, cupped her hands to her mouth and sang, S-t-a-a-a-a-a-n-l-e-y-y-y-y-y

He heard her. There, close to that cave. Frantically, he ran toward what sounded like a baseball bat smashing against a telephone pole. He swiped past a thicket of berry brambles and entered a clearing. There she was, his beautiful wife, trying to shoo a rogue buck away from the tree. She'd taken her jacket off and was about to throw it over his head.

Don't do it, honey, Stanley warned.

Mae looked down. Why not? Maybe it'll make him stop if he can't see.

But maybe it'll make him even madder! Stanley took a cigarette out of his pocket and slowly approached the animal.

What are you doing? hollered Mae.

The buck snatched the cigarette from his hand and started chewing hungrily. Stanley looked up at Mae and smiled, watching her amazed eyes go round. She studied the buck rooting in his jacket pocket for more tobacco. Yup,it's a buck all right, he told her, just not a deer buck.

Then, what kind of a buck is it? she asked.

BC Williams, Writer/Poet :: ALL WORKS :: Stories in Short :: Once upon a time, there were readers of short stories . . .